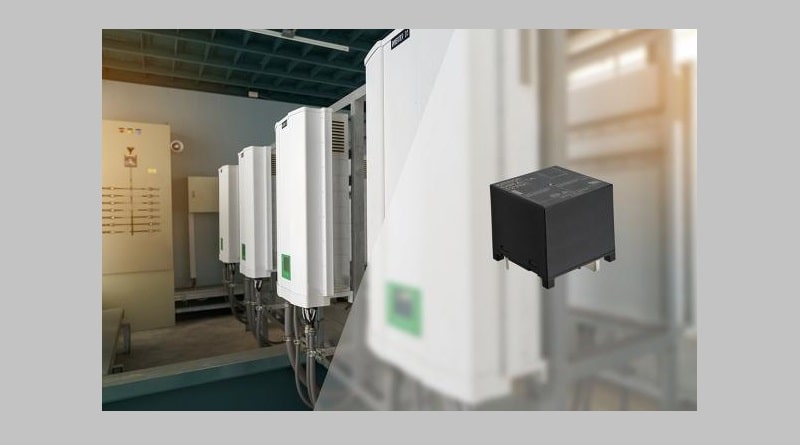 Solar Power generation facilities incur energy loss mainly due to the heat generated by equipment. With solar power plants now getting bigger in terms of capacity, these losses are becoming significant. Therefore, counter measures against heat generation needs to be taken.

One of the factors that can cause equipment to generate heat is due to the relays* mounted on PC (Printed Circuit) boards inside various equipment. Conventional high-power relays have a high contact resistance value, so energy loss due to heat generation has been an issue.

*Relays are components mounted on PCB of  equipment, used for ON/OFF control of the electric current flowing through equipment and for safety shut-off during faults.

In the past heat dissipation mechanisms such as heat sinks and cooling fans were used but still there had been cases where the deterioration of the PCB due to heat generated by the relay led to sudden equipment failure. Hence, heat generation from the source needs to be reduced which could help solar plants to be more energy efficient.

For this G9KA has low contact resistance of 0.2m-Ohm which results in lower heat generated by the relay.

About the Company: Omron Automation Pvt. Ltd. is a direct subsidiary of Omron Corporation Japan. It has its headquarters in Mumbai and sales offices in major cities of India. It is involved in sales and supply of automation and electrical components for Industrial equipments.