Alstom stated that total investment for setting up the new components manufacturing project was around INR 210 crore (25 Million Euros) spread across 15 acres of land. The factory was inaugurated in the presence of Mr. Emmanuel Lenain, Ambassador of France to India and Mr. Alain Spohr, Managing Director, Alstom India & South Asia.

Apart from the newly opened facility Alstom already has two manufacturing facilities in Coimbatore, the first one opened as early as 1978. Alstom mentioned that its new facility is equipped with modern technologies and machinery, and will be manufacturing auxiliary converters, cubicles, driver desks and Rolling Stock looms for train-sets. It also has facility for integration & testing of traction motors built for train-sets.

Alstom also claimed that the new site will create 10,000 direct and indirect jobs and currently has a gender diversity rate of 20% with more workforce to be hired in coming days.

Alstom’s Coimbatore manufacturing facilities currently deliver not just to Alstom’s Indian sites but also to Alstom sites in other countries such as France, Canada, Italy, Belgium, Germany, Netherlands, Saudi Arabia, Vietnam and UAE. The added demand from these sites put forth the need for new manufacturing facility. This would be a great push to the ‘Make In India’ initiative and would also strengthen trust for Indian made products.

Expressing his views on the occasion, Mr. Alain Spohr, MD, Alstom India & South Asia, said “The opening of this facility is a testament of our commitment to the government’s flagship ‘Make in India’ and ‘Atmanirbhar Bharat’ initiative… we are proud to be a catalyst in India’s manufacturing led growth story. We have been the preferred mobility partner on various Indian projects and are keenly looking forward to becoming a leading supplier of components across Alstom’s sites globally”.

Many sustainability measures have been taken at this new facility in accordance with Alstom’s sustainability goals for 2025, which will be applicable across its facilities around the World. The measures include targeting 80% of regular activities to be run on green energy like solar and wind, utilisation of 100% of natural light during daytime, rainwater harvesting, reusing 100% of the sewage treated water through sewage treatment plant etc.

Alstom has good order booking for train-sets manufacturing not only in India but abroad too. The upside for Indian ecosystem is that many of these orders are being completed by Alstom’s train-set manufacturing facility in Sri City, Andhra Pradesh and components for these train-sets being supplied by the Coimbatore facilities.

One among such major order won by Alstom was of Mumbai Metro’s Line 3 in December 2019 for manufacturing of 31 lightweight, fully furnished modern metro train sets of 8 cars each. The estimated cost of this order is €452 million.

Biggest among these is order won by Alstom from Danish State Railways (DSB) valued at a total of €2.6 billion. The order for manufacturing and supplying 100 Coradia Stream regional trains as well as a 15-year full-service maintenance agreement  with scope to order additional train-sets.

All these orders clearly showcase the huge demand Alstom needs to meet and the crucial role its Indian manufacturing facilities can play in meeting this and future demand. 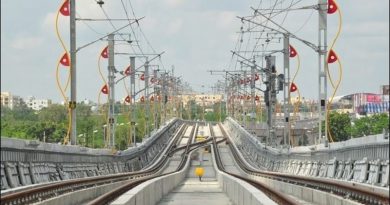