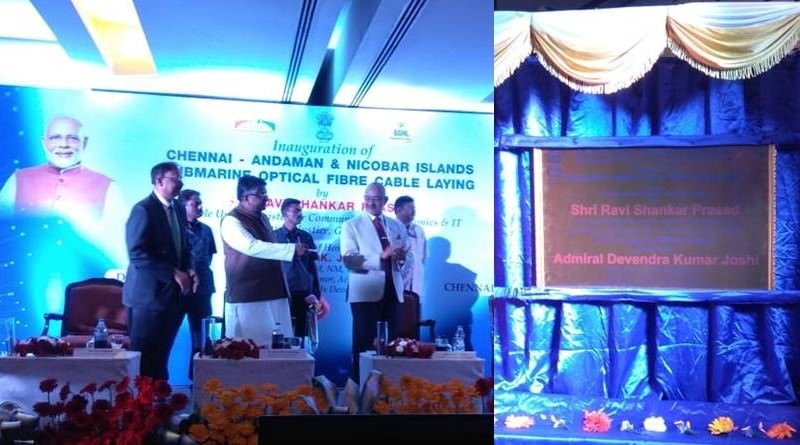 On 9th January 2020 submarine cable laying work from Chennai to Andaman and Nicobar Islands for providing high-speed Internet connectivity was inaugurated in Chennai by Union Minister, Mr. Ravi Shankar Prasad. Later in the evening the cable-laying ship was flagged off by him from Chennai Port.

2,250 km of Submarine Optical Fibre Cable (OFC) will be laid, which at the initial stage of commissioning shall provide bandwidth of 400 Gigabits per second (Gbps) across the Andaman and Nicobar islands. At present the islands are connected to the mainland through satellite link with combined availability of only 3.2 Gbps.

The estimated cost of the project is ₹ 1,224 Cr and is targeted to be commissioned by June 2020. In the project, initially submarine cables shall be laid from Chennai to Port Blair, the capital city of Andaman and Nicobar Islands covering 1,450 kms. Thereafter, the link shall be extended to seven other islands: Rangat, Long Island, Swaraj Island, Hut Bay, Car Nicobar, Kamorta and Campbell Bay covering 800 kilometers of distance.

The OFC to be laid are of four-fibre pairs, with the capacity to transfer 6.4 terabits of data per second by each fibre-pair. The spare capacity would be redundant and could be used for future applications. The depth of laying the cable ranges from 0.3 km to 3 km.

Other Highlights on sidelines of the Inauguration

At the inauguration Mr. Ravi Shankar Prasad mentioned that “The digital connectivity is important for the Andaman and Nicobar Islands for overall social development. The project will play a significant role in achieving the objective of Digital India and BharatNet, and for rolling out various e-governance projects of the Centre in the islands.”

He also announced “My Digital Commission has already approved laying of similar cable between Kochi and Lakshwadeep islands. This is being done at a cost more than ₹1,000 crores.”

NEC Technologies India Pvt. Ltd.: It is a direct subsidiary of the NEC Corporation, a Japanese multinational conglomerate in Electricals, Electronics and IT sector headquartered in Minato, Tokyo.

NEC started its operation in India in 1950. It expanded its business from telecommunications to public safety, logistics, transportation, retail, finance, unified communication and IT platforms. The company is a major supplier of submarine cables to India. It was involved in the first submarine cable project of India (Sri Lanka-India cable system, landing at Tuticorin) in partnership with BSNL, back in 2006.